Since 1990, Rick has had the privilege of pastoring Eagle Rock Baptist Church- the church where he came to know the Lord, was baptized, married, and has watched his children grow up! Rick and his wife, Judy, are the proud parents of three daughters, Kari, Kelcie, and Kimberly. Rick and Judy also have two son-in-laws, James and Mark, and seven grandchildren.

Pastor Rick is a native Southern Californian who grew up about 15 minutes from ERBC. Before becoming a pastor, his career goal was to work in radio (although he often jokes that as a young boy he considered becoming a rodeo clown). He completed an Associate’s Degree in Broadcasting and then took a job as a deejay in Santa Maria, CA. However, feeling he still hadn’t found his call in life, he soon decided to return to college. In 1977, while he was completing his Bachelor’s Degree at California State University Los Angeles, Rick was introduced to Jesus Christ through members of Eagle Rock Baptist Church. Shortly after beginning a personal relationship with Jesus, he was deeply driven to learn more about God’s Word and so, he entered seminary. It was there that he felt God calling him to serve as a pastor. He went on to receive his Masters of Divinity and Doctor of Ministry from Talbot School of Theology.

One little-known fact about Pastor Rick is that he is a game show whiz! Although he hasn’t been behind a radio mic since 1975, he has been in front of a TV camera as a contestant on Wheel of Fortune, Scrabble, Hot Potato, Match Game, Pyramid, Bowling for Dollars, and Lingo.

Andrew’s heart aches for those who don’t think that God is relevant to their lives, or that have no interest in Christianity because it’s “boring.” One of his greatest joys is seeing people come to the realization that God is alive and exciting, and that following Christ is the only way to truly live! If you sit down for a cup of coffee with Andrew, you’ll no doubt discover his passion for God, as well as his big dreams for the Church.

Andrew grew up in a rural suburb of Philadelphia in an old farmhouse with acres of land! After earning a Bachelor’s Degree in Liberal Studies from West Chester University, he felt called to pursue his Master of Divinity Degree at Fuller Theological Seminary in Pasadena, CA. Now, Andrew has over 10 years of experience serving in various ministries! His primary responsibilities currently include overseeing LIFE groups at ERBC and sharing in the weekend preaching. And, he and his wife are the proud parents of a precious daughter.

Andrew enjoys rock climbing, running, and the occasional muay thai boxing class. He also loves watching the food network and trying out new recipes. And, Andrew is a BIG sports fan. However, for fear of alienating a large percentage of Los Angeles, he only brings up his love of ALL Philadelphia sports teams at moments when it is absolutely required of him…such as days ending in Y.

Raquel has a passion for the Next Generation, and a deep desire for our little ones to know Jesus and the gospel. One of her greatest priorities is to listen to children and teens and to assure them that they have been chosen by God for a bigger and greater story. She believes that discipleship and mentoring are essential factors to make the Next Generation’s future bright and full of hope. She also believes that our children and students are not only the future of our church, but they already are the church. Therefore, we must invest, nurture, and pray wholeheartedly for them daily.

Raquel was born and raised in El Salvador. She accepted Christ Jesus at the age of 3 and has felt the calling to work in God’s kingdom ever since. She has served in different ministries like life groups, children’s and youth ministry, and various evangelical outreaches throughout her life. She went to Universidad Tecnológica in El Salvador; but after a few years in college, she decided she wanted to follow the American dream. She
came to the USA in 2000 where she studied Marketing and Communications. She and her husband,
Michael, are the proud parents of 3 wonderful children.

Raquel enjoys family days at the beach, running and having Thai tea with Boba with her kids just for fun! Her favorite time of the year is Christmas. And she loves to watch movies with her family.

James has a passion for ministering to people through Worship and the Arts! As a staff member of the Eagle Rock Baptist Church since 2003, James has worked to cultivate a creative passion in both our youth and adult congregants. He and his wife, Kari, are parents to three wonderful children.

Born in Glendale, CA and raised in Eagle Rock, James began attending Eagle Rock Baptist Church when he was just seven years old. He has since participated in the ministry at Eagle Rock Baptist Church in one fashion or another whether as a children’s choir participant (in his youth), a children’s ministry and worship ministry volunteer (in high school and college), or as a member of the staff. He has a Bachelor Degree in Psychology and a Master Degree in Pastoral Studies with a focus on Worship Leadership, both from Azuza Pacific University.

James has always been very mechanical and artistic, and he still dreams of being a designer for the Lego Company. Although having children has slowed down his literal brick-building, he still enjoys designing with LegoCad programs on his computer.

With a background in Christian Education, creative talent, and a passion for ministering to others, Hortensia fervently pours into the life of the congregants of Eagle Rock Baptist Church and our surrounding community! As Director of Caring and Senior Ministries, she oversees prayer, visitation, hospitality, and many of our counseling ministries.

Hortensia grew up in the Los Angeles area. She attended a junior college in Lincoln Heights and earned her beautician’s license. For 33 years, she worked as a hair dresser all over LA and Burbank while she also continued her schooling to receive her Early Childhood Education certificate. Hortensia loves kids and has worked in a Christian school as both a teacher’s aide and with an after-school day care program. She loves working with kids because they make her laugh and seem to always have something new and entertaining to say.

Hortensia likes to knit, play tennis, and go hiking. She also likes to cook, and enjoys eating her delicious creations as well. She also has a wonderful sense of humor and often provides comic relief for our staff and church family!

Of all the staff members at ERBC, Solongo Jacobsen gets the award for traveling the farthest to get here. She came from the other side of the world, from the country of Mongolia. She first heard about the Lord when South Korean missionaries came to her village when she was 16, and she accepted the Lord as her Savior a year later when New Zealander missionaries taught her English. Within a year of starting to learn the language, Solongo was serving as interpreter for the missionaries in prison ministries and translating their Bible materials from English to Mongolian.

A mere two years after she began learning English, Solongo took the courageous step of coming to the U.S. to attend Vanguard University, where she majored in business administration. Interestingly, her first introduction to ERBC was during her first year in the States when a college friend introduced her to ERBC missionaries Jack and Faith Cowell. And of all the countries they could be serving, they lived in Mongolia! It was a nice taste of home. After finishing her B.A. at VU, Solongo discovered that accounting, her least favorite class in the business program, was actually pretty fun when she did it in real life! So she enrolled at National University and earned her MBA with an emphasis in accountancy.

After working several accounting jobs, in 2007, Solongo took a step of faith and quit a job with an unhealthy environment without having another job lined up. God rewarded that faith by dropping the job of accountant at ERBC in her lap. The church had been looking for over a year (unsuccessfully) for an accountant to hire, and Solongo was an accountant now looking for a job. It was the perfect fit. Solongo has worked for ERBC as the accountant ever since, with time out to give birth to her four children. With no extended family in the U.S., Solongo has come to look at the people of ERBC as her true extended family and loves working at the church.

In 2009, Solongo married her love, Bryce Jacobsen, at the beautiful chapel on the Vanguard University campus, and Pastor Rick Mandl officiated at the ceremony.

The name Solongo means rainbow in her native language of Mongolian. 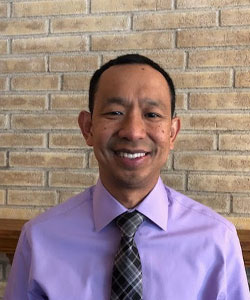